Communication and advertising agency with advanced techniques of photographic post production, digital art and retouching.
“ Visual communication as a means to grow your business „

Images are the best way to express a concept and present a product or service, but especially in recent years the art of photographic post production and photo compositing has given more and more space to the creativity of some artists, which later became viral throughout the world, who started to try their hand at creating scenes (image compositing) of complete fantasy, creating situations where the real and the absurd fit together perfectly.
To understand each other better, let's think of an elephant sitting on top of a skyscraper while sipping from a can of Coke with a straw, or a bear with a hat on his head who hangs around on a square paved with wood and riding on a tiny tricycle … it's clear that are scenes that could never be realized on a photographic set except that one does not want to spend € 100,000 for a photo.
These photo compositing techniques provide to extract the various subjects, objects and environments from different photos and then compose everything into a single image where fantasy and reality seem to hold themselves in balance. 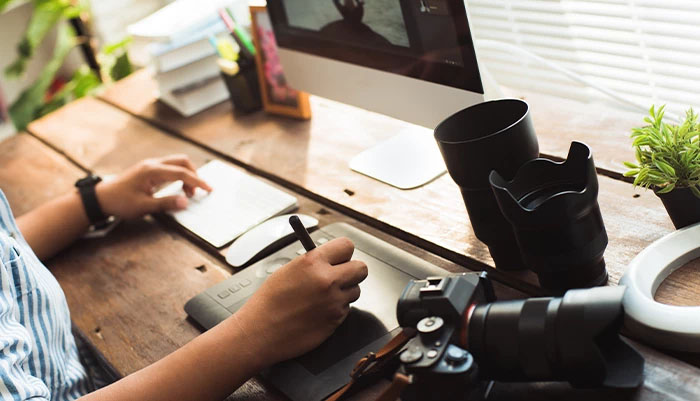 To get an idea of the photographic post production process we're talking about, go to the page Video Business Presentation of this website and scroll down to the bottom of the page, there you will find videos that we made to explain something difficult to express with words.

What is the purpose of advertising your product or service with Digital Art, apart from probably the very personal taste for art?
Let's jump back in time until the second half of the 70s, early 80s, when an advertiser tried a risky idea for that period, he decided to to photograph a model with a partially uncovered breast, veiled transparencies that let us imagine everything and holding the product of his client. The idea was that even the most demure and morally loyal man would not resist turning to look at that advertising sign … what was the result?
That that company sold more with that advertising than it had in the previous 10 years, it was an unprecedented marketing triumph, but like all things, advertisers from all over the world understood the hint and the point was reached seeing nude photos also to advertise candy for children and the hazards were no longer enough, until it expires in the obscene and completely misrepresenting the fundamental role of women in society. From here "object woman" that led crowds of girls to protest in the squares and famous actresses and singers to fight for those rights.

Chef For One Day

Room With A View

But let's stay with the concept of Digital Art and photo compositing.

What's the purpose of an advertising image? Attract attention to highlight a product and let people memorize it as much as possible.
Does the image represent the intrinsic values of the product and the philosophy of the company that produces it? Yes, but also NO … it must succeed in making people turn heads and attract attention among 200 signs, if people notice the image and approach it then they will also read what your product offers if instead the image contains all the most noble values but nobody notices it, it would probably have been better to invest the money paid for advertising in a nice restaurant dinner.
Photographic post production, photos compositing and digital art are one of the main keys of the new visual communication.